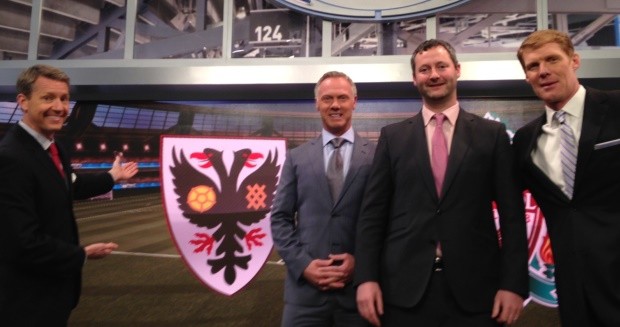 Spending the first working day of the year in the Fox Soccer studios watching my beloved AFC Wimbledon in the FA Cup seemed an entirely appropriate start to 2015.

This is going to be very much a year of sport.

Now friends of mine, aware of my previous career as a sports journalist, have accused of me of forgetting I'm now working in Government.

But working on US-UK trade relationships isn't a reason to avoid sport, quite the opposite.

This year will see three more NFL games being played at Wembley as part of the ongoing London Series.

The direct economic benefit of additional high-profile sporting events is clear - more ticket sales at Wembley, spend on accommodation, transport, restaurants and so on.

But the indirect benefits of scenes of London being broadcast on television screens all over the US is not to be underestimated. There are the tourism benefits but also the reminders to US business of the closeness of the relationship.

Serious business folk, who happen to be keen football (they don't need to call it American football over here) fans, are travelling over to these games and business opportunities are being created.

There are significant benefits now while three or four games are being played a year - this will be amplified if a franchise were to settle in the UK, as is being considered.

Economic studies show that would be worth at least £100m a year to the UK economy in direct benefits alone. And therefore well worth me attending the Super Bowl in Arizona next month (no, not the match, but the international partner event that takes place the night before).

The hosting of the Rugby World Cup by the UK this year is another example of sports meets business.

The third largest sporting event in the world, behind the football (our football) World Cup and the Olympics, this represents a major opportunity for the UK.

It is expected to draw in 460,000 visitors and will provide an economic boost of close to £2.2bn. We will also be planning all manner of business networking events both in the UK around the matches but also in the overseas markets whose teams will be participating.

My colleagues in Australia, New Zealand, France and South Africa will be particularly busy but the US is also playing and the interest here, certainly in certain pockets of this country, is not to be ignored.

The Rugby World Cup will build on the success of the 2012 London Olympics, which I don't need to remind you was worth over £16bn in direct benefits to our economy and an incalculable amount in goodwill, reputation and the promotion of 'brand UK'.

But it is not just about major events. Sport as a theme pervades other transatlantic opportunities. Sports goods exports are themselves valuable and there is even a sports-themed film opportunity.

Robin Friday: the Greatest Player You Never Saw, is a film about an iconic English working-class hero set against the world of football in the 70's -  produced by Brits based in Los Angeles, developed by Film Agency Wales and scheduled to shoot in the spring in Cardiff with support from the Creative sector of the Welsh Government .

Just another example of how sport and business and the US-UK come together.

And we can't forget the Special Olympics World Games, taking place in LA this summer, the largest event here since they hosted the 1984 Olympics. And which will see over 200 representatives flying the flag for team GB.

As for the FA Cup, brave fourth-tier Wimbledon couldn't quite overcome their Premiership rivals and create the upset all the neutrals (and Fox Soccer pundit and former player Warren Barton and I) wanted.

Both goals in a 2-1 win were scored by Stevie Gerrard, set to arrive here in LA in the summer as the latest British export (after David Beckham) to join the Galaxy.

If you are interested in doing business with the US then contact the UKTI team in the US.