The Hungarian Grand Prix is just around the corner and it is always a proud occasion for me. Formula One is followed around the globe but it is a peculiarly British sport. Eight of the eleven F1 teams are based in the UK and 75% of global motorsport R&D takes place there. Formula One is, simultaneously, a global sport and an annual roadshow of British automotive innovation.

This year, the Grand Prix is taking place at a particularly important time for the advanced engineering sector in Hungary, and indeed the whole of Emerging Europe – a region which stretches from Poland in the north to Croatia in the south, Austria in the west to Bulgaria and Romania in the east.

The automotive sector is a huge part of the region’s industrial base. A few statistics will make the point:

The aerospace industry in the region is less high-profile, however, it too is experiencing double digit growth across Emerging Europe. While both are strategically important industries in the UK, they perhaps are even more so in many of the countries of this region.

The automotive sector in particular will need to adapt if it is to maintain its competitive edge. In the face of strong competition from emerging markets further east, it is no longer enough to rely on proximity to Western Europe and lower labour costs. The region needs other differentiators, such as innovation and research and development, which are amongst the core competences of the UK industry

We are witnessing strong demand in the region for innovation, particularly connected to the ‘mega trends’ driving these industries. In the automotive sector, these include the need to reduce fuel consumption and lower CO2 emissions, to adapt to short product life-cycles and to incorporate a growing volume of electronic components (50% of a car’s parts today, compared with 1% back in 1950). Only in this way will Emerging Europe lift itself above those countries competing primarily on the basis of low wages, the only sustainable place for the industry to be long-term. 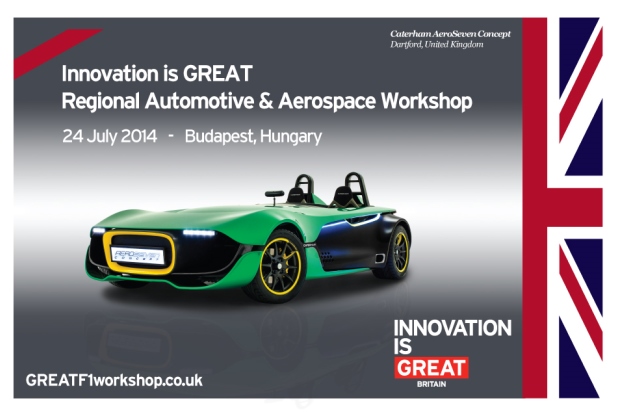 This plays into the hands of UK companies, and is the reason we are hosting, in the run up to the Hungarian Grand Prix, an Innovation is GREAT Regional Automotive and Aerospace Workshop in Budapest on 24 July. The workshop, which is free for all participants, will outline the business opportunities that exist in Emerging Europe to UK companies and will showcase the best of British technology and innovation to potential partners in the region. The day will close with a VIP reception at my residence, giving guests the chance to meet and speak with F1 celebrities, team members, and automotive and aerospace industry CEOs. Please click here for more information and to register.

The automotive and aerospace sectors are essential for the economic health of this region, but they will only maintain their current status if they can move up the value chain by becoming more innovative. As we are reminded every time a Grand Prix is staged, the UK is a world leader in engineering and British expertise can help Emerging Europe meet its innovation challenge.