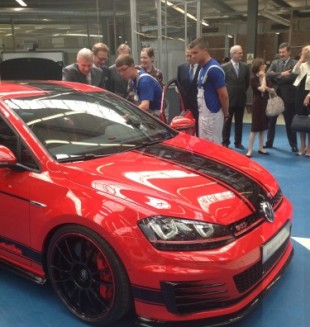 And had VW not breathed new life into Bentley with its significant investment in the UK, the luxury car manufacturer would not be enjoying record sales and global success.

In Germany to celebrate the 300th anniversary of the Personal Union – the link between the Royal Family and the House of Hanover – the visit to the vast home of VW was a fitting venue to be discussing the influence of one country on another.

After the Second World War Major Hirst took over the running of the partially-destroyed factory – his first order was for 20k Beetles from the British Army in northern Germany.

Over the next few years he built up the factory before handing it back to the Germans, who have since transformed VW into a global giant with many of the leading brands now part of its stable for cars, bikes and trucks.

The factory in Wolfsburg, three times the size of Monaco, now produces a new car every 10.4 seconds.

VW have also invested heavily in the Bentley site in Crewe since taking over in 1998, with £500m put into the facility in the first two years. Now employing around 4,000 staff, Bentley were further boosted last year by the announcement, attended by the Prime Minister, that the new SUV would be manufactured there – an investment worth £800m and a thousand jobs.

Tremendously proud of their Royal Warrant, the relationship between this great old car company and the Royal Family is a close one – and HRH arrived yesterday in a Mulsanne, something that turned heads all across Lower Saxony during the visit.

However despite HRH being shown a selection of models from across the VW Group range during his visit -  a couple of Bentleys, a Bugatti, a Porsche and an Audi A8 – in some ways this visit to a car factory wasn’t actually about cars at all.

Significantly more time was spent talking about skills, apprenticeships and education – a particular passion for HRH – than about W12 engines. In the UK we are not afraid to learn from others, and there is much to admire about the German dual-education system that sees learning on the job as integral to creating the type of workforce needed to produce cars (or indeed so many other manufactured products) to the quality standards required by German companies.   This foundation, on which so much German manufacturing and exporting success is being built, is something that is now coming back in the UK. The automotive story of Great Britain is as strong now – with the success of Bentley, Rolls-Royce, Mini (all German owned) as well as the spectacular rise of JLR and renewed investments from Nissan) – as it has been for 25 years. 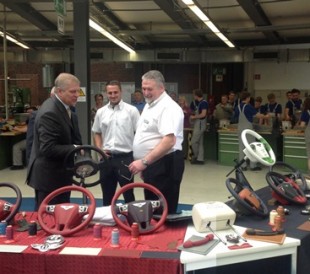 Many in the industry acknowledge a ‘lost generation’ in UK manufacturing – with automotive hit particularly hard – but with significant investment from overseas, renewed Government interest in rebalancing the economy and initiatives to promote apprenticeships again, a revival has been underway for a few years now. Speaking to a group of youngsters from Bentley, here in Wolfsburg as part of their skills education with some time in Slovakia also to come, it is clear the benefit that an apprenticeship can bring – and how Bentley and its staff are benefiting from its relationship with its parent. But also how the unique British expertise excellence in wood and leather, in particular, is – in return – benefiting the top end of the wider VW range.

It really is a story of co-operation and mutual success. So when the new Bentley SUV rolls off the assembly line in Crewe in 2016 ready to fulfil the, by then, bulging global order book, we shouldn’t forget the son of a clock maker from Yorkshire.

His innovation, courage and leadership laid the foundation to bring 30m Golfs to the roads of more than 150 countries – and a few Mulsannes, Flying Spurs and Continentals too