In 2013, Mexico approved a series of constitutional reforms aimed at strengthening the Mexican economy and fostering competition. The Energy Reform was conceived as central to achieving these objectives. After almost 80 years of monopoly control over the energy sector in Mexico, in the form of PEMEX and CFE, the entire industry is now open to private sector participation in all forms.

Legislation concerning the oil & gas industry was of paramount importance for the success of the Energy Reform; hence, thorough changes both in regulation were (and still are) actively enforced. PEMEX, Mexico’s National Oil Company, is witnessing the erosion of its hegemony. The industry’s liberalization will see the reconfiguration of upstream, midstream and downstream activities.

In order to ensure an adequate implementation of the reform, the Energy Ministry bolstered the existing institutional framework. New regulators were created to stimulate world-class practices in the Mexican oil & gas industry. A National Hydrocarbons Commission (CNH) was created to design tenders and ensure transparency along the process. Concerns surrounding health, safety and environment were addressed by developing a national HSE agency: ASEA.

However, these changes are still not enough to guarantee Mexico’s energy security. More capital, technology and expertise are needed in order to develop Mexico’s most challenging resources, such as deepwater and unconventional reservoirs. Despite volatile global oil prices, Mexico is an attractive destination for long term projects. The time to invest in the Mexican oil & gas industry is now.

The Energy Ministry, specifically the CNH, built two sets of tenders to define exploration and production (E&P) rights and obligations regarding Mexican hydrocarbons. Round Zero was undertaken in 2014, and PEMEX was granted 83% of all the proven and probable (2P) oil & gas reserves in Mexico. PEMEX is also expected to migrate their existing service contracts towards a new regime consisting on Production Sharing Agreements or Licenses. In 2016, farm-outs are also contemplated for mature, extra-heavy oil and deepwater fields.

Round One, the second set of tenders, was released afterwards and in different stages. In the Gulf of Mexico, CNH has already allocated 2 Production Sharing Agreements (PSA) for exploration and 3 PSAs for extraction of hydrocarbons in shallow waters. Companies, such as ENI International, Talos Energy, Pan American Energy and Premier Oil were successful in these bidding processes.

Onshore blocks, tendered in Round 1.3, witnessed the largest amount of participation; 25 extraction licenses were awarded predominantly to Mexican companies, but not excluding involvement from American, Canadian and Dutch companies. Deepwater blocks, “the jewels of the crown”, will be tendered in Round 1.4. Some of the largest oil & gas players in the world, such as Shell, Total, Exxon, Chevron and BP (among others) will be competing for 10 extraction licenses in the last quarter of 2016. Estimates for this fields range from 15 to 20 billion barrels of oil equivalent.

Oil & gas in Mexico is considered as a High Value Opportunity, given the considerable amount of opportunities for investment. Forecasts of UK exports and services for 206/17 run above £150 million GBP in upstream, with considerable potential to increase. UK capability can strengthen Mexican supply chains in areas such as training & education, project management, HSE consultancy, subsea technologies and advanced engineering. UKTI is constantly monitoring opportunities and engaging with key stakeholders, having as its prime objective the success of UK companies worldwide.

Should you like to get more information regarding opportunities, please visit Exporting is GREAT or contact the UKTI team in Mexico at uktimexico@fco.gov.uk 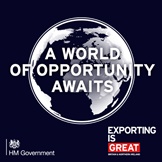 Read more on Mexico oil and gas opportunities on the Exporting is GREAT website. Visit the site for export leads, practical support and inspiration for UK companies who want to grow their business through export

Read a blog post on oil and gas opportunities in Brazil