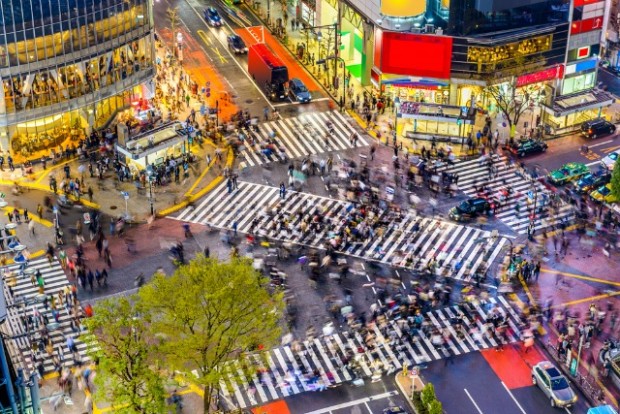 David Mulholland, UKTI Japan Marketing Officer to UK Exporters, ponders the lessons gleaned from living in one of the trendiest areas of Tokyo.

The picture above is pretty recognisable, right? Well anyone with an interest in Japan will know it instantly. Shibuya crossing, famous for being one of the busiest pedestrian crossings in the world. Known locally as the ‘scramble’ – I’d like to think this is down to the chaotic nature of trying to navigate your way through the thousands of people walking in each and every direction. It’s both an adventure and a challenge every time I get there. This is your guaranteed ‘Wow! – I’m in Japan’ moment if there ever was one. Especially for someone like me who grew up in a tiny village in rural Scotland which only has 4 streets! More people cross here in 10 seconds than the entire population of my childhood community.

You might then wonder why I chose to live in Shibuya? Well I would say it’s actually taught me a lot and been beneficial to my job. My awareness and knowledge of Japanese culture, trends and fashion has increased tenfold. Living right in the thick of it has given me the confidence to speak with authority about what kind of products or ideas work in Japan, and what doesn’t. There is little subtlety to Shibuya, standing out and making noise is perfectly acceptable in this eccentric part of Tokyo. The glaring neon lights, enormous advertisements and TV screens blasting out the latest promotions are testament to that.

It's the people though that I'm aware of most. I’m accustomed to the noise and in your face ads, but the people will never cease to surprise me! And it is from them that you can learn the most. Admittedly it’s populated mostly by the younger generations who like to hangout and shop in this stylish neighbourhood, but youth are the future so there is much that businesses can learn from.

Seasonal trends strike me as the most obvious. Standing at Hachiko (the exit of Shibuya station next to the crossing) in spring, summer, autumn and winter will present you with a completely different set of people. Actually that’s not strictly true, they are probably the same people, but look remarkably different. Sure everyone changes their clothes and appearance to match the weather or season, but Japan really takes it to the extreme. Consumers in Japan are hyper-fashion conscious, and for the most part would not be seen dead wearing something out of season. When it is declared on the news that today marks the start of spring, you really notice it! Shoppers can’t wait to strut their new purchases and they look forward to that official announcement to change wardrobe, literally like clockwork.

With attention to detail such as this on a repeat cycle, this represents big opportunities for British consumer goods companies. Tailoring your products to Japanese size, taste, quality expectations and of course season are all important things to consider when introducing your offerings here. Exclusivity sells well, for example introducing a range unique to Japan or a particular season. Japanese consumers could be considered rather wasteful too. Last year’s goods are almost certainly out the window as shoppers hunt for the newest items. The youth amassing in Shibuya often have high levels of disposable income as most will still live at home with their parents and have well-paid jobs. Therefore, replacing their wardrobes and accessories 4 times a year is not even blinked at – in fact it’s probably more often than that!

There are of course some exceptions to the rule that I have seen in Shibuya. Not everyone follows suit – yes you’ll find lots of people wearing bright neon beanies in the scorching heat in mid-summer! Or some lone renegades who particularly stand out for their unusual get-up. I won’t even begin to explain what Halloween is like on the crossing, that’s a whole other blog topic in its own right! After all, Shibuya is a hub of youthful expression, comparable to a large scale music festival, except no one has time to see any of the bands, they’re too busy hunting down their next purchase.

My final musing would have to be about the ‘Union Jack effect’. I can almost guarantee if you wander around Shibuya on any given day you’ll see someone wearing a Union Jack of some description. Japanese people can’t get enough of it. Brand Britain is incredibly strong here, and you should not underestimate it. Companies should actively exploit their heritage or history behind the brand/product – this level of detail really matters to consumers here. It affirms quality, reputation and the desire to own something truly made in Britain.

So if you think you have something to cater for the diverse population of this iconic area of Tokyo, chances are it will be well received all over Japan. Although Shibuya is a focal point where new trends are created, they soon spread quickly, just as quickly as another one has emerged. Endless opportunity awaits, so come make your mark!