The New Year always brings with it resolutions, a sense of renewed purpose, and big plans for the coming 12 months – and 2015 is no different. This year though, The Year of the UK in Mexico and The Year of Mexico in the UK, will bring not just hopes and plans, but a real step change in the UK and Mexico’s bilateral relationship.

That’s not to say that the bond between the two countries isn’t already strong. I reported in a previous blog the enormous affinity for the UK here in Mexico, that over 400,000 Brits visit the country each year, and that our businesses are on track to double bilateral trade to £4.2 billion by the end of 2015. But this ‘dual year’ aims to make the relationship even better, with 12 months of activity in culture, arts, education, science, innovation, and of course trade and investment, which will be at the very heart of the year.

Following the launch of the Year of the UK in Mexico by HRH the Prince of Wales and President Enrique Peña Nieto during the Royal visit in November , the events are already coming thick and fast. The next few months will set the tone for the trade and investment strand, with a number of exciting events already planned. 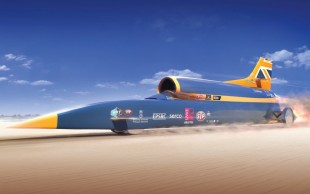 UKTI Mexico will be hosting an ‘Innovation is GREAT Business Summit’ in February, at which key Mexican decision-makers will learn about the very best in UK innovation and why the UK is an ideal destination for inward investment. On display will be a fantastic example of innovative British engineering – the Bloodhound supersonic car (pictured)  – which is powered by a jet and a rocket and designed to go at 1,000mph!

We’ll be welcoming a trade mission from Wales, hosting a large UK company delegation in Guadalajara for the popular ANTAD food and drink trade show, and the UK will be the country of honour at the AgroBaja agri-business trade show in Tijuana – again with a visiting UK delegation.  And the UK will also be the nation of honour at one of the country’s largest beer festivals, Cervefest in Mexico City, with a number of British brands on display.

Back in the UK, UKTI will be hosting an energy roadshow in Aberdeen to coincide with the Subsea UK event, as well as oil and gas events in London, Derby and Newcastle to promote the enormous new opportunities in the sector following Mexico’s energy reforms.

But the highlight of the first quarter is without question going to be the State visit of Mexico’s President Enrique Peña Nieto to the UK in March. The President will be spending four days in the UK, accompanied by a large Mexican business delegation. There will be a large amount of commercial activity around the visit, including a ‘Mexico Day’ in the City aimed promoting trade and investment opportunities in the two countries. The visit will underline the importance of the UK and Mexico’s bilateral trading relationship, and should flag up the potential for more business between the two nations that will deliver benefits well beyond 2015.

Sadly I won’t be around for much of the dual year’s events as I am going to be moving on to a new position as Head of UKTI Nigeria, based in Lagos. But I will be following The Year of the UK in Mexico with great interest, from afar. I’ve thoroughly enjoyed every minute of my time here – the challenging but stimulating work, the beautiful and diverse country, the fascinating history and the amazing food – and of course the incredibly welcoming people. I’m certainly going to miss it.

Find out more about the dual year and the events taking place in both countries at ukmexico.mx. Follow UKTI Mexico’s activity on Twitter, LinkedIn and Facebook.