Let me start by wishing you a happy anniversary. Of what? well, I don't know, but everyone seems to be commemorating something this year - UK-Japan trading relations 400 years,  London Underground 150 years, Dr Who 50 years -   so I'm sure you'll have some milestone of your own to celebrate. For me it's 30 years working for the Foreign Office, which is hard to believe. It seems no time since my first day feeling completely intimidated by the grandeur of its offices in Whitehall and learning how to pin a cardboard "flag" to a submission (pin front to back to front then bury the tip in the middle  so that the Minister doesn't prick his finger). I hadn't realised that becoming a diplomat would entail lessons in haberdashery.

Anyway, anniversaries have been a theme of my work in the past couple of weeks. First of all I was invited to speak at a celebration to mark the centenary of doing business in Japan of John Smedley, royal warrant holders and manufacturers of truly covetable knitwear

Their Imperial credentials actually predate their regal ones - their archives contain copies of the annual orders they received from the Taisho Emperor of Japan for 365 vests and 365 pairs of long-johns. Now that's what I call getting close to your customer. 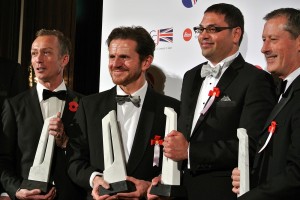 Winners at the British Business Awards Ceremony in Tokyo

Next up was the annual British Business Awards ceremony in Tokyo, marking the 65th anniversary of the British Chamber of Commerce in Japan. A fantastic evening, with prizes for Agusta Westland and their partners Kawasaki Heavy Industries, Lush, Steve Crane of Business Link Japan, publishers Custom Media, the British School in Tokyo and Guy Perryman of InterFM radio station, who has done more than anyone else to introduce Japanese fans to British music and lifestyle.

The judges included Michael Woodford, former CEO of Olympus, Nikki King, MD of Isuzu Trucks UK and Jon Harding, COO of UK Trade and Investment, so the winners can feel justly proud to have been recognised for their excellence by their business peers. The awards attracted a record 51 nominations this year, proof that British business is booming in Japan.

Then a few days later the British Market Council marked its 40th anniversary with a reception at the British Ambassador's Residence. The Council was set up by 5 of the big Japanese trading houses in 1973 (yes, my maths is better than my sewing), as a way of countering the criticism at the time of Japan's huge trade surplus, and its image as a protectionist, impenetrable market (partly true, though it clearly hadn't stopped John Smedley or the founding fathers of the British Chamber).

The barriers have now largely disappeared, with the remaining ones on both sides the subject of free trade negotiations between Japan and the EU ( hey, another anniversary! - the UK joined its precursor 40 years ago this year). But the Council continues in its generous support of British businesses seeking to enter the Japanese market, sponsoring several UKTI initiatives each year - interpreters to help companies exhibiting at trade fairs, directories of UK suppliers, journalist visits to the UK to cover UK products, services and trends for the Japanese media.

The BCCJ, the British Market Council, UKTI - just three of the many organisations who are here to help smooth your way in the Japanese market. Some 30 companies and organisations have joined together in the Export to Japan partnership to help British companies to establish and develop their business here, with practical help and advice. Just check out the "Build Your Network" pages of the Export to Japan website and see how many helping hands are out there. Do take a look, get in touch with us on exporttojapan@fco.gov.uk - and start preparing for your own centenary of doing business in Japan in 2113!