It takes a lot to get me out of bed at 5am. An early flight to an exotic holiday location might do it. But otherwise forget it. 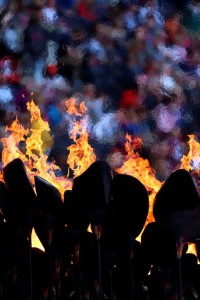 Unless, that is, it’s the Olympics. Last summer I adapted my body clock so that I could be up to see the evening action at the London games in real time, despite being 8 hours ahead in Japan. And on Sunday morning I repeated that (for me) heroic feat so that I could see the decision on the 2020 host city live.

I probably needn’t have bothered:  that clip of Jacques Rogge opening the envelope and handing the games to Tokyo was replayed on Japanese TV at least 20 times an hour for the ensuing 24 hours. To say that Japanese people are euphoric is like saying that Jamie Oliver is quite lively – a huge understatement.

For a country that’s felt marginalised economically by the rise of China and its fast-growing neighbours, that’s suffered the triple body-blow of a magnitude 9 earthquake, a devastating tsunami and the nagging uncertainty of a nuclear accident and that still struggles to find a place on the world stage commensurate with its economic and social strengths it’s a matter of huge pride and relief to receive such a strong endorsement from the international community.

Their joy was compounded the following day by the news that wrestling will retain its place as an Olympic sport. Wrestling is a reliable medal-winner for Japan and its two premier female wrestlers, in particular, are national icons. (I’ve always thought it rather interesting that for a country that strictly respects personal space and avoids physical contact in everyday life – bowing instead of hand-shaking, change handed to you on a little tray rather than direct into your hand, taxi-drivers wearing white gloves to pass you your receipt – Japan is remarkably strong at contact sports and hand-to-hand combat: judo, boxing, wrestling, sumo…)

Previous Olympic bids from Tokyo have suffered from a perceived lack of public support. Residents on the whole weren’t actively opposed, just a bit apathetic about the whole thing. Again, an interesting Japanese cultural trait: in surveys people tend to cluster around the “neither yes nor no” fence-sitting option, rather than express strong positive or negative feelings.

The manager of a hotel in Osaka was bemoaning to me the other day the fact that he would never win the monthly prize run by his chain for the highest customer satisfaction scores, because for his guests (90% Japanese) “good”  was the ultimate accolade. This may also say something about the exceptionally high standards of service that are considered normal here, but that’s the subject of another blog I think.

Anyway, this time the Tokyo bid team was leaving nothing to chance: every athlete who’d ever competed in the Olympics or Paralympics was pressed into service to galvanise their hometowns into supporting the bid. The streets of Tokyo have been bedecked with flags bearing the Tokyo bid’s colourful floral logo, and the underground stations and trains lined with posters inviting passengers to imagine the excitement of London 2012 coming to Tokyo.

The TV schedules have been filled with feel-good documentaries recalling the wonderful, heady days of the 1964 Olympics, which heralded Japan’s return from the trials of war and gave birth to those symbols of national pride and engineering genius the shinkansen (bullet train) and Tokyo Tower. There was even a full length feature film released last year, based on a popular manga, which depicted the lives of a Tokyo community in the run-up to the Games suddenly finding their horizons widening and discovering that anything seemed possible. (“ Always Sanchome no Yuhi“ – if you fancy seeing this innocent evocation of a simpler era.) It seems to have done the trick, because by the time of the vote opinion polls were showing support rates of some 70%.

That probably helped to reassure the IOC members. I don’t think the entirely coincidental trip by the British Embassy cricket team to play a match just outside the exclusion zone around Fukushima Dai-Ichi nuclear plant on the day of the vote had any impact on their thinking, but at least it will have reassured the Japanese that they don’t have too much to fear from British challengers in that particular sport.

So now the task begins of making a reality of the inspirational, if slightly saccharine, promotional videos. Having been in Japan in 2002 when they co-hosted the World Cup I think their claim to be a safe pair of hands is absolutely justified. The transport and other arrangements all ran like clockwork, and the usual formality and reserve was abandoned, with even salarymen replacing their suits with football shirts and shaking hands with England fans in the street. And Japanese creativity let loose on an opening ceremony extravaganza should be something to behold.

We’ll be doing our bit in UKTI to ensure that the games are every bit as successful and memorable as London 2012 by introducing UK expertise and know-how to the organisers. Our initial assessment is that they will be particularly interested in British solutions on security, IT, design, communications and sustainability, but as plans coalesce we’ll be able to form a better idea of the business opportunities. Already two of the biggest contracts to be let have gone to British firms – on communication of the bid (nice job Nick Varley!) and on the design of the main stadium (congratulations to Zaha Hadid). So things are off to a good start. The 2019 Rugby World Cup will also take place in Japan, so we’re looking at the potential there as well. Do drop us a line on exporttojapan@fco.gov.uk to ensure that you get early word on how your company can share in the excitement.

Meanwhile, I’m off for an early night. Just wake me up if you’ve booked me a flight to somewhere nice.