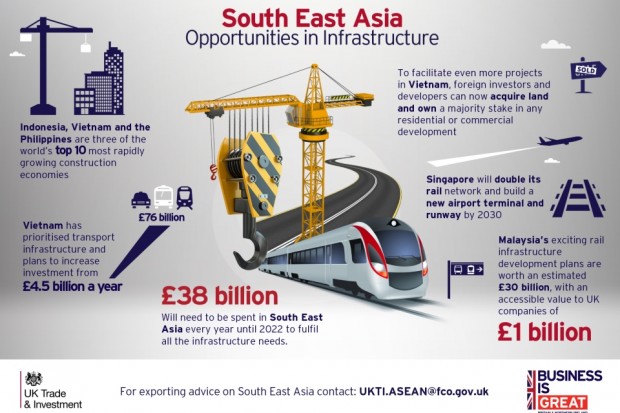 I think the ASEAN infrastructure market has huge potential over the next decade. Infrastructure is a top priority of governments in the region, with expansion and development of urban, intercity and high-speed rail systems, new airports, ports, vital water and power developments.  It is estimated that US$60 billion will need to be spent every year until 2022 to fulfil all the infrastructure needs across the region. That creates a huge opportunity for UK businesses.

The 10 countries that make up the ASEAN region (Brunei, Burma, Cambodia, Indonesia, Laos, Malaysia, Philippines, Singapore, Thailand and Vietnam) have roughly the same economic output as the UK, yet 10 times the population at 600 million people. It boasts three of the world’s top 10 most rapidly growing construction economies – Indonesia, Vietnam and the Philippines – each estimated to continue growing between 6-9% a year. Three other economies in the region – Singapore, Malaysia and Thailand – are also growing strongly, at 3-5% a year.

Traditionally, the business environment in some ASEAN countries has been challenging, but government reforms now underway across the region are making it a very attractive destination for investment and for doing business in. For instance, recent reforms in Burma and Vietnam create more attractive and accessible markets for private sector investment under a Public Private Partnership (PPP) finance model. Laos too is promoting a PPP model with current opportunities in road construction. This will help in spurring the much needed infrastructure growth with government budgets for capital spending unable to achieve the required level of ambition to maintain their rapid economic growth. Progress is strong across the board, but two countries especially stand out for me.

Singapore is ranked as number 1 in the World Bank’s Ease of Doing Business survey and by Transparency International for corruption perception. As ASEAN’s maritime hub it has a well-educated, largely English-speaking population. It’s the natural starting point for many UK firms in the region and its location in the centre of South East Asia also makes it an obvious base. "It’s the place to be, you have access to so many places from here, within four hours’ flight you can reach something like two billion people” says Clive Lewis, associate director at Arup Associates.

Vietnam has prioritised transport infrastructure, and plans to increase investment from US$7 billion a year to over US$120 billion. Approval has just been given to start work on a new international hub airport estimated at US$5.4billion for the first phase, and two new urban rail networks valued at US$23 billion are under construction.

To facilitate even more projects, reforms mean that, for the first time, foreign investors and developers can acquire land and own a majority stake in any residential or commercial development.

This is a significant signal of Vietnam’s political will to encourage investment, and indicative of attitudes across the region as international businesses, many British, help ASEAN countries deliver major infrastructure projects.