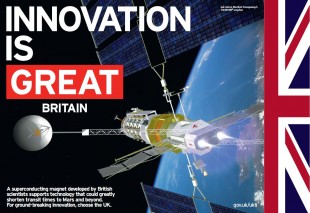 On 6 March 2015 NASA’s Dawn Mission will endeavour to enhance our understanding of the solar system when it rendezvous with, and orbits the dwarf planet Ceres, once again drawing the world’s attention to the exploration of space.

Britain’s own contribution to the space industry doesn’t always make the headlines, but this is one of the fastest growing sectors in the UK, contributing a reported £11.3 billion to the UK economy each year, employing more than 34,000 people.

Britain also contributes to the space programmes of other nations, and in some surprising locations. One example is the Ad Astra Rocket US-Costa Rica project, where the UK is proud to be able to use its global scientific expertise and precision manufacturing to help a truly visionary space technology become a commercial reality.

I spoke to both Costa Rica born Dr. Franklin Chang Díaz, veteran of seven NASA Space Shuttle missions and now President and CEO of the Ad Astra Rocket Company, and British scientist Stephen Harrison about this project, and the role that Britain has played in developing a superconducting magnet for the VASIMR® electric propulsion engine – an innovation that could reduce cost and significantly shorten journey times through space.

Dr Chang, tell us about the VASIMR project, and the benefits that it can bring to Space exploration?

The VASIMR® electric propulsion engine is Ad Astra Rocket Company’s flagship project, the product of more than 30 years of research and development in plasma physics and space propulsion technology. The VASIMR® engine works with plasma, an electrically charged gas that can be heated with electrical power to extreme temperatures by radio waves and controlled and guided by strong magnetic fields. The magnetic field also insulates any nearby structure, so temperatures well beyond the melting point of materials can be achieved. In rockets, the higher the temperature of the exhaust, the higher its velocity and the lower the fuel consumption. Plasma rockets feature exhaust velocities 10 times greater than conventional rockets, so their fuel consumption is extremely low.

British scientists have worked on this project – how has their contribution helped to get the project to where it is today?

British scientists developed the advanced superconducting magnet for Ad Astra’s VX-200 VASIMR® engine prototype. This engine is the most powerful plasma rocket in operation in the world today. The superconducting magnet is a critical component of the rocket as it provides the magnetic duct that guides and expels the plasma from the engine. The magnet design is unique in that it is compact, lightweight and operates with no cryogenic fluids inside. It has operated reliably, since 2009 supporting more than 10,000 high power firings of the rocket with no failures.

As an astronaut, what contribution did study of STEM subjects make to the success of your career?

STEM subjects provided me with the foundational knowledge to pursue an advanced degree in engineering and physics and enabled me to become a rocket scientist and an astronaut. STEM subjects provide a foundation for many careers and help us better understand the technological world in which we live.

British universities have a world class reputation for research and development in this area. From your experience, what advice would you give to students looking to study STEM subjects in the UK?

Since the time of Newton, British scientists have been at the forefront of science and technology. Students studying STEM subjects in the UK have access to a deep tradition of scientific excellence and will be fully equipped to continue to expand the frontiers of knowledge.

When should we expect to see the VASIMR rocket in action?

We hope to fly very soon…and we know it will be awesome!

Stephen, tell us about your contribution to the VASIMR project

My contribution to the VASIMR project was to design a solid state cooling system which would maintain the superconducting magnet reliably at a temperature within 5 degrees of absolute zero.

VASIMR requires a magnet to control the plasma.  Because it is intended for use in space, the magnet needs to generate high fields but with minimal power consumption and the smallest weight possible.  A permanent magnet requires no power, but is heavy and can generate only modest fields.  An electromagnet can produce higher fields, but is also heavy and requires huge amounts of power.  However, a superconducting magnet can generate high fields while being light and compact, and needing relatively modest amounts of power: the ideal combination for a machine such as VASIMR.

Superconducting magnets are made from special alloys which lose all their electrical resistance when cooled to temperatures close to absolute zero. The most familiar examples are the large magnets in MRI scanners, which are cooled using liquid helium.  Helium is a rare enough resource on Earth, and in space it is simply not available.  My task was therefore to find a way to cool VASIMR’s refrigerator-sized magnet to an extremely low temperature – 268 degrees C below freezing, or just 5 degrees above absolute zero – without resorting to liquid helium.

Fortunately there are now machines available which can cool down a small block of copper to just these sorts of temperatures without using any liquid helium.  All parts of the VASIMR magnet were connected to a cooler of this type using strips of aluminium purified to 99.999% to improve its thermal properties.  Special insulation was used over all the magnet surfaces and the whole system was enclosed in a vacuum flask, to reduce the heat leaking in to an absolute minimum.

VASIMR is just one of many incredible space projects that the UK contributes towards.

Looking ahead to November 2015, European Space Agency astronaut, Major Tim Peake will become the latest Briton to blast into space when he travels to the International Space Station. We’ll take a closer look at Britain’s contribution to the Space industry around that time

In the meantime, more information on the work of the UK Space Agency can be found at https://www.gov.uk/government/organisations/uk-space-agency